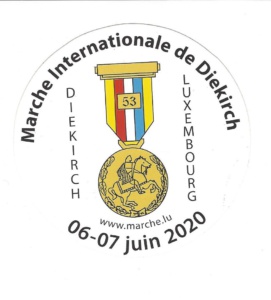 THE MEDAL OF THE “MARCHE DE L’ARMÉE”

Among the first to use firearms were the troops of JOHN THE BLIND. It was a so-called bombard of about 20cm in calibre throwing stone projectiles at distances over 200 meters. The gun’s barrel was approximately 3 times the size of the calibre and was fixed on a wooden, 2-wheeled trail.

John the Blind or JOHN OF LUXEMBOURG (1296 – 1346), King of Bohemia (1310 – 1346), son of Emperor Henri VII, was killed on the French side during the battle of CRECY (France), where he fought bravely notwithstanding his blindness.

On August 10, 1296, Margaret of Brabant, wife of Henri V, known as Emperor Henri VII, gave birth to a son named Jean (John) at the Castle of Luxembourg. At the age of fourteen, John was declared to have reached majority, an excellent opportunity to confer him the title Count of Luxembourg which he bore for the first time on the 3rd of July 1310.

On the 30th of August that same year, John Count of Luxembourg was married to Elisabeth, daughter of Emperor Wenceslas II. A few moments prior to the ceremony, Henri II awaited the procession while seated on his throne. Amongst the knights, in waves of standards showing a red lion on a silver background, the arms of Luxembourg, John detached himself. When passing by his father, John jumped from his horse and kneeled in front of the Emperor. At that moment, Henri VII had him swear the oath and bestowed him on the kingdom of Bohemia.

All over Europe, John, King of Bohemia, fought wars. In Bohemia he fought side by side with Ludovic of Bavaria against Frederic the Beau of Austria. In Lorraine he was at war against the city of Metz, in the Netherlands against Flanders and Brabant. He took several charges on Lithuania as well as on northern Italy.

On the 11th of July 1346, John’s son was crowned in Rens (Rhineland-Palatinate) as Emperor Charles IV (crowned on the 26th of November 1346 in Bonn). Together they went to Trier where John the Blind got news that Philippe de Valois, King of France, requested immediate assistance to move against the English.

After 3 months of truces, negotiations and pontifical intervening with no results, the war had resumed between Edward III and Philip VI. During the siege of the fortress of Aguillon by the Duke of Normandy (King John’s son-in-law), Edward III landed on the Cotentin coasts on July 12, 1346. From Lisieux and bypassing Rouen, Edward III followed the river Seine valley, destroyed Louviers to ashes and took Gaillon. Whilst he could not cross the river Seine at Verdun, he proceeded towards Mantes.

On the 12th of August, Edward III moved on Paris. Philip had issued orders to destroy all houses outside the city, but the owners protested and took up arms to foil this plan. While sojourning in Paris, John the Blind and his son Charles, together with some 500 knights succeeded to subdue the uprising. Due to lack of food, the English army began to withdraw to the river Somme. After having crossed Poix, the forward elements were attacked by the knights of John the Blind, but the Count of Northhampton went on help the English to repulse the no longer outnumbered Luxembourgers to some 2 miles of Amiens.

On the 26th of August 1346, Philippe de Valois split his army into 3 corps to attack the English army, which had taken position on a hill close to the village of Crécy, located in the river Maie valley. In the first corps and leading the Luxembourgers, John the Blind and his son fought against the English corps, commanded by the Prince of Wales. When the fight was at the top, John the Blind fell heroically during that battle.

John the Blind’s body is buried at the crypt of the Cathedral of Luxembourg-city.

In 1962, honouring this heroic fight of John the Blind, his seal was adopted as a shoulder sleeve insignia to be worn on the left arm of the dress-uniform of the personnel of the Luxembourg Army General Staff.

In 1964, this patch became the unique emblem to the army uniform.

With the same reference and for the first edition of the “Marche de l’Armée” in 1968, the “Amicale des Anciens Artilleurs Luxembourgeois (AAAL)” choose the seal as the logo for the medal.